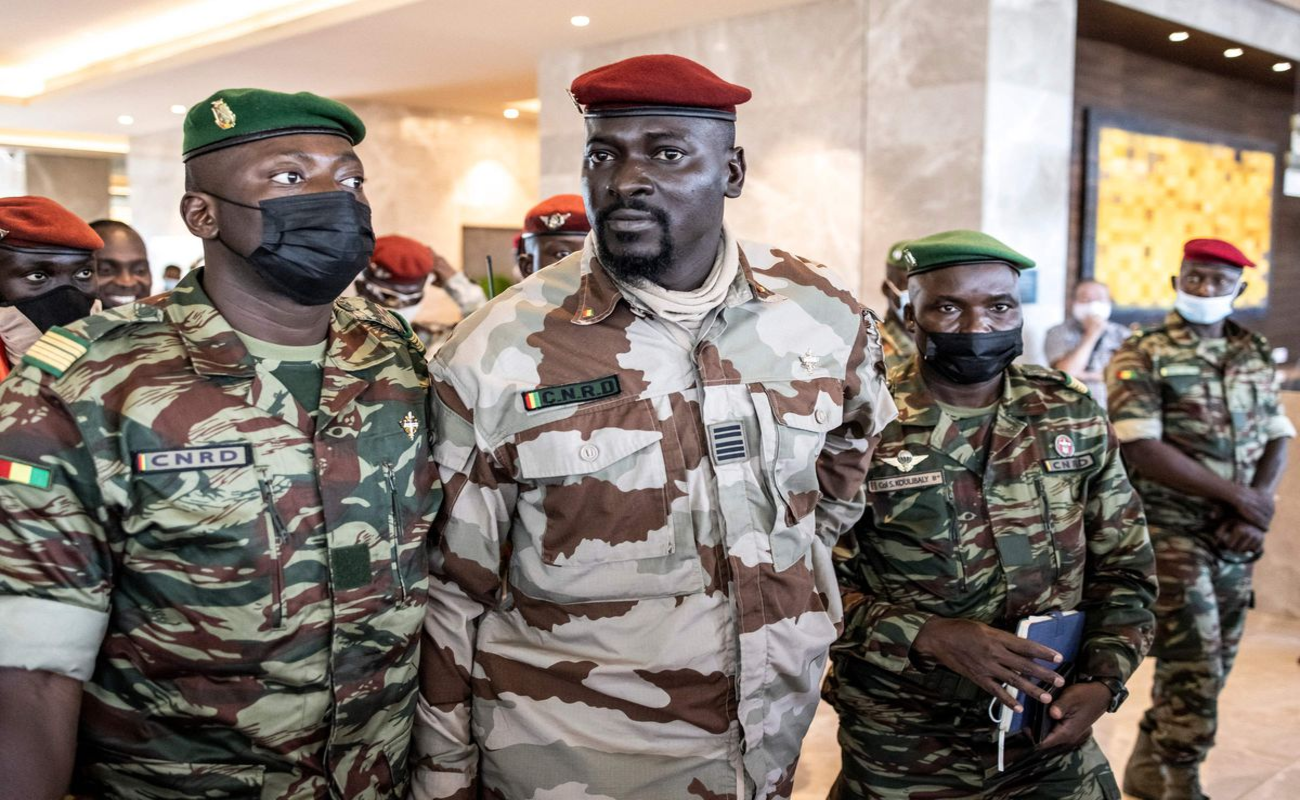 THE REPUBLIC OF GUINEAis a West African country that held its first democratic elections in 2010 after decades of authoritarian rule. While civilian rule was supposed to bring about peace and stability, the country has been plagued by corruption, violence, and impunity. On September 5, 2021 Colonel Mamady Doumbouya overthrew President Alpha Condé after holding him hostage. Doumbouya then announced the dissolution of the government, government institutions, and annulled the constitution. On October 1, 2021 Doumbouya was sworn into office as the president.

Former President Condé was democratically elected in 2010 and vowed to increase democratic efforts in Guinea. However, he became increasingly authoritarian during his second term. Prior to his third term, he changed the constitutional two-term limits for presidents through a fraudulent referendum in March of 2020. People believed this was a constitutional coup. While during his first term, Guinea’s economic performance improved thanks to the mining sector, during his second term tensions increased between ethnic groups. The COVID-19 pandemic, deteriorating economic conditions, and the constitutional coup-led to rampant public dissatisfaction. Large peaceful protests were organized by civil society organizations and opposition leaders to protest Condé’s third term and constitutional referendum from 2019 to 2020. In that time, security forces killed 200 protesters. This power vacuum allowed Colonel Mamady Doumbouya, a former French legionnaire and commander of Guinea’s elite Special Forces Group, to stage a coup against Condé.

Since Doumbouya has come to power, the military has dismantled various military checkpoints Condé had in place. Coup leaders have also released political prisoners and given freedoms to Condé’s main opposition party. Some former ruling party officials have even expressed their support for Doumbouya’s junta. It is unclear if these actions are self-serving or if Doumbouya genuinely supports democratic ideals.

While Colonel Doumbouya led the coup, he was receiving training from U.S. Green Berets. The U.S. has publicly condemned the coup and denied having any knowledge of it. This has contributed to the pattern of  U.S.-trained officials who have consolidated power in their countries, like General Abdel Fattah el-Sisi of Egypt. However, this is the first time someone has done so in the middle of their U.S. military course. It was later found out that Colonel Doumbouya and his team left in an armed convoy from their U.S. base while their instructors were sleeping. The proximity of U.S. officials to the coup was made worse by footage that showed U.S. military officers in a crowd of cheering Guineans on the day of the coup. Some Guineans claimed the U.S. knew of the coup and was involved due to mining interests in the country. U.S. government spokespeople have vehemently denied these claims. In 2012, U.S.-trained commanders in Mali also defected and took troops, weapons, and American skills to overthrow the government. Doumbouya’s coup raises some questions about the ethics and validity of U.S. training programs abroad.

This coup is the third in only five months in West Africa. Guinea, Mali and Chad have had four coups total in the past year. Since Nigeria moved to civilian rule in 1999, there was a strong sense that coups would be over in West Africa. However, this positive trajectory has ended due to “democratic” leaders taking unconstitutional additional terms or lifetime appointments. In these three countries, the transfer of power has remained within ruling elite groups even though coups are largely anti-corruption. Mali’s coup leader, Colonel Assimi Goïta, promised to transition to civilian rule after 18 months but has since removed Mali’s civilian transition leadership and declared himself president. He has not submitted a new constitution or conducted voter registration. Chad’s new ruler, Mahamatt Déby, came into power after his father, a previous coup leader, was killed in a clash between the military and rebels. While the U.S. initially called for a transition of power according to the constitution, it backed down after France and the African Union announced their support for Déby. Déby has similarly announced an 18 month transition and a new constitution but has taken no significant steps toward these goals. While a variety of organizations and nations have opposed these coups, these same groups have failed to take any action.

Although Guinea is less tense due to lower military presence than there was during Condé’s second term, there are regional and international concerns that Doumboya’s control of Guinea will weaken democracy in Guinea and in West Africa. Doumboua and the ruling junta, the National Rally and Development Committee (CNRD), have pledged they are committed to rewriting “a new constitution together.” Despite support from various civil society organizations who want to work with the CNRD to rewrite the constitution, the junta has failed to share any details about this major endeavor. Doumboya has also installed a nightly curfew. While he excused those working in the mining industry, some (LINK) are concerned he is personally and corruptly invested in the industry.Although Doumbouya installed a nightly curfew for all Guineans, workers in the mining industry have been exempt. While this is done to safeguard economic and business interests, some are concerned he is corruptly invested in the mining industry. In addition, Col. Doumbouya has publicly quoted and applauded other coup leaders who led military dictatorships and persecuted their opponents. EU members of parliament threatened to sanction him for alleged human rights abuses during Conde’s presidency prior to his coup.

Colonel Doumbouya’s exact stance on democracy and his vision for Guinea are unclear. While he admires corrupt coup leaders, he has made efforts to show the Guinean people he wants to help them. The military government has released a “transitional charter” that claims it will steer Guinea back to civilian rule, yet no timeline for this transition was given. In late September, he visited the graves of protesters who were killed by Condé’s forces and said he wants to organize “a fair and equitable trial so that those responsible for the violence can be held accountable for their actions, therefore putting an end to impunity” in Guinea.

While the Economic Community of West African States (ECOWAS), the U.S., the African Union, and the UN have condemned all recent coups in West Africa, none of them have taken significant steps to punish coup leaders. As a result, the actors above may lose credibility as forces of democracy.